A PHP Error was encountered

Message: Only variable references should be returned by reference

Hello, Thanks for reading our news article. We are happy to share with our reader , what we read

Google removing BBC link was not a good judgement

Google's decision to remove a BBC article from some of its search results was "not a good judgement", a European Commission spokesman has said.

A link to an article by Robert Peston was taken down under the European court's "right to be forgotten" ruling.

But Ryan Heath, spokesman for the European Commission's vice-president, said he could not see a "reasonable public interest" for the action.

He said the ruling should not allow people to "Photoshop their lives".

The BBC understands that Google is sifting through more than 250,000 web links people wanted removed.

The figure relates to more than 70,000 individual requests made between 29 May and 30 June - with an average of 3.8 links requested per person.

After an initial surge, the rate of requests has levelled out at about 1,000 per day.

The highest number of requests so far has originated in France, with 14,086 requests made in the same period. France is followed by Germany, with 12,678, and the UK with 8,497.

It is not known how many of the requests have been successful. 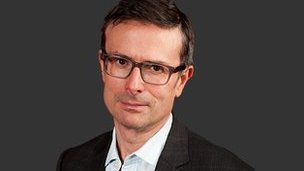 What Google has done is not quite the assault on public-interest journalism that it might have seemed.

Unless, that is, you believe that when someone makes a public comment on a media website, that is something that is voluntarily done and should not be stricken from the record - except when what is at stake is a matter of life and death.

Read more: Why has Google cast me into oblivion?

Google has begun notifying media companies, including the BBC and the Guardian, that it started to remove links over the past week.

Among them, were links to an article about the bank Merrill Lynch, posted by BBC economics editor Robert Peston in October 2007.

The identity of the person who made the request is not yet known, although it is understood not to have been the subject of the article, former Merrill Lynch boss Stan O'Neal.

Instead, the request relates to the reader comments that appear underneath the story.

The article will now no longer appear in Google search results whenever someone searches for the name of the person who made the request.

However, if the same search is done outside Europe, the result will appear as normal.